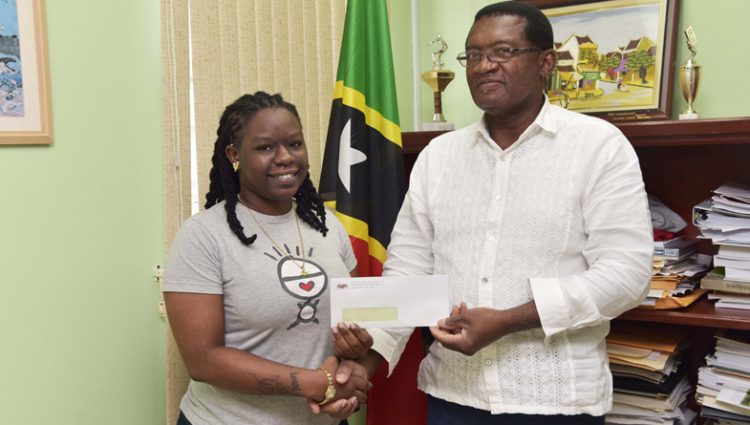 Monday  12th December, 2016 (Basseterre, St. Kitts) – NHC, in its quest to include the public in the redesigning of its logo, a component in its rebranding strategies, held a logo design competition that commenced on November 21st and concluded on Wednesday 30th November, 2016.

The winner was chosen from among thirty-one (31) designs by a panel of 8 that consisted of Board Members and Managers, as well as, a top Web Graphic Designer, Diandre Herbert of Panda, a Design company.  The winner of the competition is Kia Foreman from Market Street, Basseterre, who won with a total of 85 points. Kia will receive Five Hundred Eastern Caribbean Dollars (EC$500.00) as the prize award.

Minister of Human Settlement with responsibility for NHC, the Hon. Eugene A Hamilton, congratulated Ms. Foreman during the prize presentation: “I take this opportunity to thank you, Ms. Foreman, for participating in our logo design competition and congratulate you on placing 1st among 31 entries.  I encourage you to continue using your talent to contribute to nation building and continue along the path of success. Over the past few months we have been engaged in rebranding NHC which includes a new logo, new colours and a focus on customer relations, among others. NHC has pledged to continue to provide avenues for individuals and families to progress in the upcoming years.”

Ms. Foreman replied: “I am very excited to be the winner as I have never won any competition before. I was hesitant to enter as I thought that my chances of winning will be nil. Thanks to Mr. Hamilton, the management and staff at NHC for giving me this opportunity.”

NHC’s rebranding strategy is keeping in line with its motto, ‘Raising Standards’.