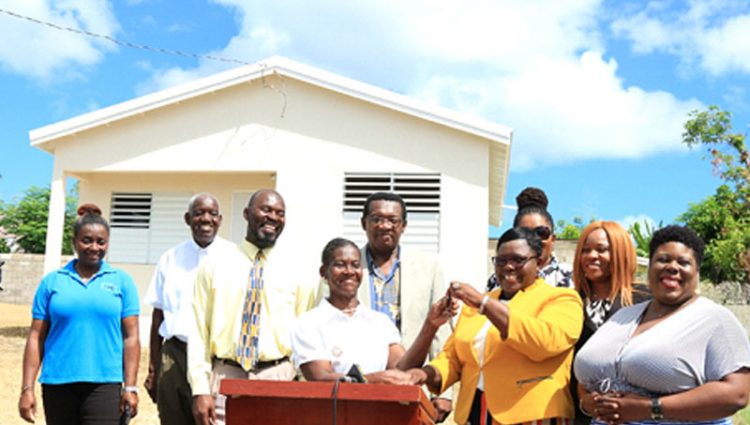 Basseterre, St. Kitts, November 2nd, 2017: Minister of Human Settlement et al., the Hon. Eugene Hamilton in partnership with the National Housing Corporation (NHC) handed over the keys to a newly renovated house to Ms. Pamella Cornelius at a ceremony held in St. Peter’s on November 01, 2017.

Minister Hamilton noted that the property was damaged since 1995 and was well in need of repairs. He also mentioned that the Government has recently done other repairs and renovations for underprivileged persons in Cayon and Tabernacle who were living in unsatisfactory conditions in their community.

He added that, “Those of us who are in authority must make it our duty to ensure that the very basic things; food, clothing and shelter are afforded to those who really need it.”

“The National Housing Corporation is always on-duty when it comes to providing adequate shelter for our citizens and residents, not forgetting the poor and indigent,” stated General Manager of NHC, Ms. Elreter Simpson-Browne. She explained that a thorough assessment revealed that the house was in need of a new wall structure, roof, windows and doors, as well as, new electrical wiring, fixtures and fittings.

The Hon. Brandy-Williams, Junior Minister of Social Development et al., in the Nevis Island Administration was very instrumental in the initiative to renovate Ms. Cornelius’ home.
“This morning I may be a little incoherent because I am lost for words. This project has finally come to fruition. In 2014 at a political rally just down the road I made mention of this house and I said to the Unity construct at that time, when you get into office one of your first projects must be the renovation of this house,” Hon. Brandy-Williams noted.

After the presentation of the keys by Hon. Brandy-Williams, Ms. Cornelius thanked all involved in the project and noted that her family is very pleased that they can now live in a more habitable and healthy environment.

“I want to thank the Government of St. Kitts and Nevis and NHC for playing a special role and also the many hands who did work on this house,” she stated.

Mr. Valentine Lindsay, Chairman of NHC, gave the vote of thanks. During his message he wished Ms. Cornelius continued blessings in her newly renovated home.