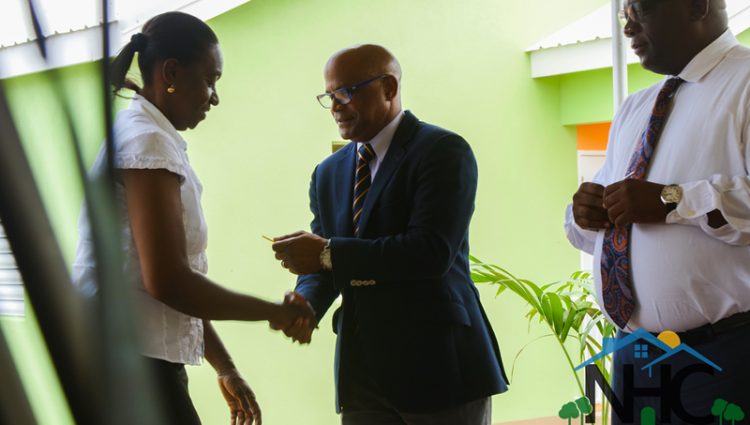 BASSETERRE, St. Kitts – SIXTEEN individuals were made homeowners yesterday (June 12) after receiving the keys to their brand new houses thanks to the National Housing Corporation in collaboration with the Team Unity government in its continued effort to increase home ownership in the Federation of St. Kitts and Nevis.

This initiative falls under the Unity Housing Solution Program, which is aimed at increasing housing capacity on the island of St. Kitts.

In a handing over ceremony held at Green Acres Housing Development in Halfway Tree, the sixteen persons, after being handed their keys, could not contain their excitement.

Parliamentary Representative for Constituency Four, Hon. Lindsay Grant congratulated the new home owners and encouraged them to take care of their homes and to take advantage of the opportunity that has been given to them, especially since there are many who are still awaiting their own keys.

Grant informed that the Team unity government received a $50 million loan from Social Security and the interest rate at which the homes are being mortgaged at is a mere two to five percent. He stated that the government is working for the people but those people must do their part with regards to meeting their monthly mortgage payments.

He added that the government was not finished with Constituency Four and some 12 to 16 more homes are to be constructed in Conyers.

Minister with responsibility for Home Settlement Hon. Eugene Hamilton, stated that of the 300 homes to be constructed by NHC, 45 of them will be built in Constituency Four. He informed that the homes are much bigger and stronger than those constructed in the past.

He told the attendees that the homes are now constructed with galvalume roofs that can withstand more high winds than shingles. This, he said, is essential during the hurricane seasons.

Hamilton further said that the Team Unity government will not be leaving them with dirt roads, so they can expect proper road fixtures in the near future.

Mrs. Elreter Simpson-Browne, General Manager of NHC, also congratulated the homeowners and asked of them to put God first in their homes. Mrs. Browne expressed her gratitude to the Team Unity Government, the Hon. Eugene Hamilton, Board Members, managers and staff at NHC, as well as, the contractors and finishers that worked assiduously to complete these homes.

Prime Minister Dr. Hon. Timothy Harris, in congratulating the new home owners, also encouraged them to honour their financial obligation, adding that making their monthly mortgage payments is very crucial to other persons receiving their homes.

He noted that the payments from these homes could be turned over into building additional homes for other residents.

The Prime Minister urged the home owners to beautify their new homes with flower gardens and backyard gardens as well as proper fencing.

The keys distributed today were for homes constructed on land provided by NHC, as well as, privately owned lands.