NHC Awards Another Million Dollars to Another Local Contractor 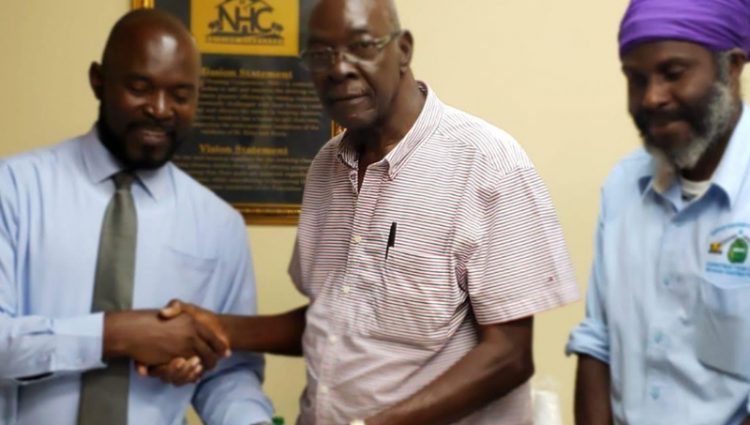 BASSETERRE, St. Kitts, February 7th, 2019 – Continuing on its promise to raise standards by upgrading the lives of the people of St. Kitts, the National Housing Corporation (NHC) has begun another million-dollar construction project in Basseterre.

Lefco Equipment Rental and Construction Co. Ltd today signed an EC $1.6 Million Dollars contract with NHC to construct roads in Pine Gardens, Shadwell. New on the list of projects for 2019 are new roads in several NHC communities around the island.  The Pine Gardens is one of several road contracts that will be awarded during 2019.

It is the desire of The Hon. Eugene Hamilton, Minister of Human Settlement et. al. with responsibilities to NHC, to install road infrastructures in all NHC communities that was built but do not have paved roads. This he believes will bring completeness to the NHC developments and address issues of dust, health concerns and inaccessibility to collect waste raised by homeowners in these areas.  The Minister strongly believes in the Utilitarian Principle, “doing the greatest amount of good for the greatest number of people”, therefore the construction of housing coupled with paved roads will complement his beliefs.

According to Mr. Valentine Lindsay, Chairman of the NHC Board, “the construction of these new roads in Pine Gardens, Shadwell will address complaints by residents of dusts that can be linked to Asthma and other respiratory issues. The NHC is also committed to raising standard by way of addressing the concerns of its clientele”.

The new roads construction in Pine Gardens is expected to commence on Wednesday 13th February with projected completion date of June 30, 2019.