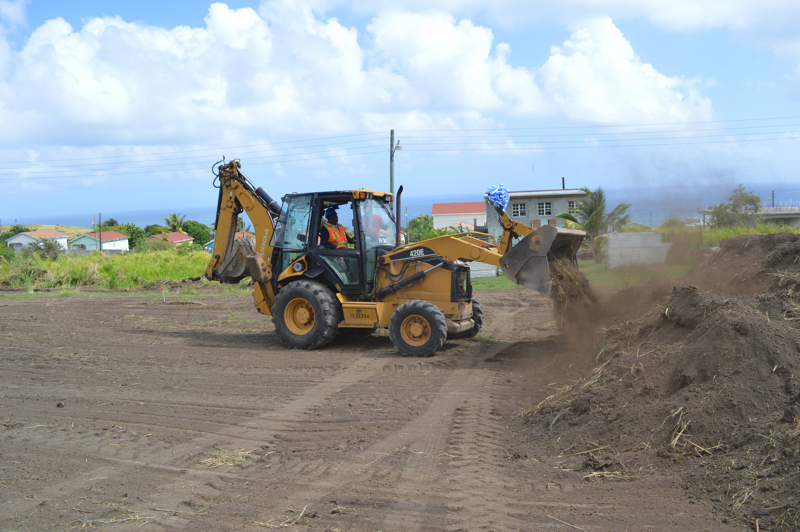 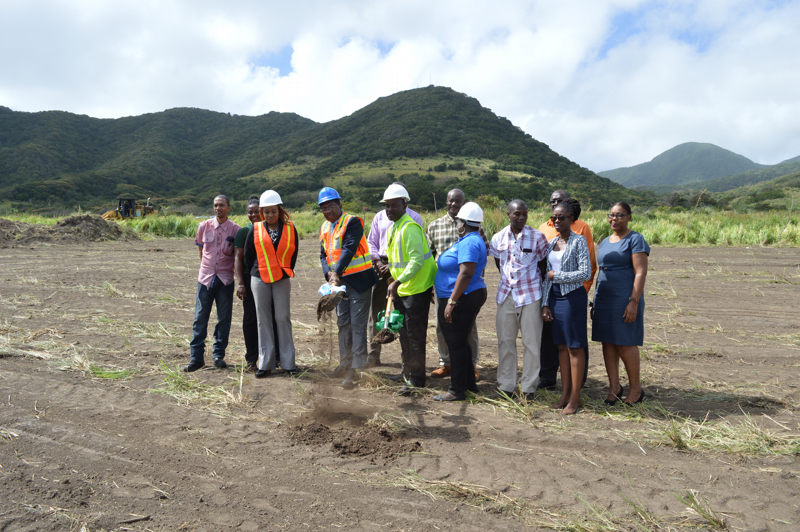 BASSETERRE, ST. KITTS, MARCH 1ST, 2017— In less than two (2) weeks following the Launch of the Unity Housing Solution Program, The NHC and the Hon. Eugene Hamilton, Minister of Human Settlements, Community Development, Land and Cooperatives et al., broke Ground in Cunningham Heights, Cayon as was promised by the Minister himself.

The Ground Breaking Ceremony that was held in Cayon on March 1st, 2017 signifies the Minister’s commitment to commence construction within the first 60 days of 2017. It also shows that this is ‘another promise spoken another promise delivered initiative, as stated by the General Manager of NHC, Mrs. Elreter Simpson-Browne.

“We are breaking Ground right here in Cayon, in Cunningham Ext. Phase 3, the first site where we will begin construction of some 10 houses in the first phase of our housing project in delivering 300 houses. We, at NHC, have been in this position several times before and every time we have delivered. However, this time, the stakes are higher and we are doing a ‘new thing’ as we embark on producing an enhanced and superior product through the efforts of our Minister of Human Settlement, the Honourable Eugene Hamilton. Therefore, I must simply reiterate the point that this housing initiative of the Government of St. Kitts and Nevis through, the National Housing Corporation, is indeed another promise spoken, another promise delivered.”

Under the Unity Housing Solution Program over 300 Bungalows and Town Houses will be constructed across St. Kitts over the next 18 months beginning in Cunningham Heights with near 50 affordable homes.

As stated by Mr. Valentine Lindsay, Chairman of the NHC Board, “near 50 affordable homes will be built right here in Cunningham Heights Cayon; and notice that I said we are building homes, not houses. This present location where we are seated, some 26, 000 square feet of land was marked out for recreational activities; yes, we are also in the business of building communities. We trust that today’s activity is a sign to all that the Government is committed to providing affordable housing for the infirm and the indigent of our nation.”

Speaking at the Ground Breaking Ceremony in Cayon, Mr. Eugene Hamilton felt a sense of pride when speaking on the new sizes and amenities of the houses and the significance of the date, March 1st.

“Breaking Ground on March 1st in Cayon means a lot to me and should mean a lot to the people of Cayon.
It is the first day of Lent, it is the 1st day of Spring and it is also the very first Ground Breaking in St. Kitts under the Unity Housing Solution Program. I am feeling very excited that I can deliver to the people of Cayon and by extension the Nation, on this day, painted houses with cupboards and hard roofs (galvalume), bigger rooms and other amenities when compared to the previous homes.

Other areas of the island will also see Ground Breaking shortly as 100 to 120 homes will be constructed over the next 6 months.

“I say patience because I know that housing is always in great demand and after two years I could understand your impatience, but after two years, Team Unity has delivered with three more years to go. You will be satisfied with the Team Unity Government as homes will be constructed in other areas such as Crab Hill, Abbot, Newton Ground, Stone Castle, Dieppe Bay, Mansion, Lavington, Stapleton, Conaree, Estridge and Wellington Road,” he noted.

Mr. Hamilton thanked the Social Security Board for the loan of EC$50 million dollars to construct the homes. He also thanked that NHC Board of Directors, Management and Staff of NHC for their hard work and dedication.

Staff of the Week: Myrtle Nelson