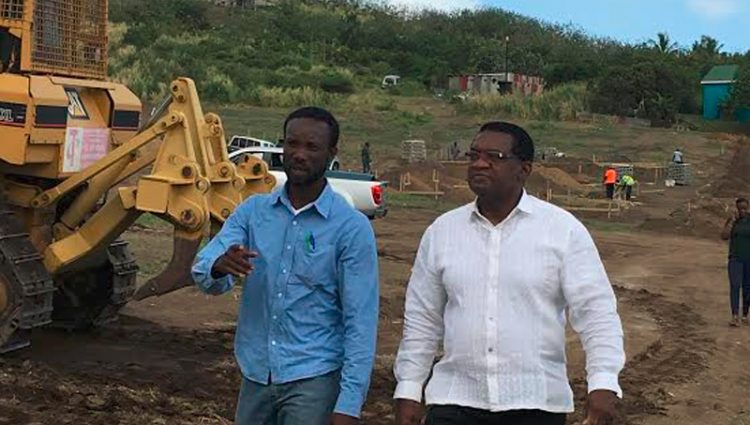 BASSETERRE, ST. KITTS, April 11th, 2017— Following the Ground Breaking Ceremony that was held in Cunningham Heights, Cayon on March 1st, staff of the NHC and the Hon. Eugene Hamilton, Minister of Human Settlements, Community Development, Land and Cooperatives et al., held a site visit with the media to update the public on the construction progress to date.

The site visit was done to inform and appease the public that Mr. Hamilton’s commitment to construct 110 homes within 6 months of the ground breaking is on schedule. Visiting the site were the Hon. Eugene Hamilton, Mr. Valentine Lindsay-Chairman of the NHC Board, Mr. Vere Benjamin-Building Inspector at NHC with responsibility for Cunningham Heights’ construction, contractors and staff of the NHC Public Relations department, along with representatives from ZIZ and SKNIS.

According to Mr. Hamilton, “when I was a little boy we called this area Spooners and we still do but the official name given by the developers is Cunningham Heights. On this site we are building 15 houses in the interim for the ordinary people. Six (6) houses will be constructed on the western side of the development and nine (9) on the East.”

Mr. Hamilton stated that all of the foundations at Cunningham Heights have been excavated with some footings poured and will continue the following day. Simultaneously, some roads were being cut and water was being installed. Mr. Hamilton is happy with the progress made thus far so that utilities can be installed by the time the project is completed.

“I am very satisfied that we have approximately eight (8) or nine (9) contractors who have been engaged to construct these fifteen (15) homes and that they should finish the project on time. I will continue to follow up with the progress of Cunnungham Heights and so I will be back within one week or 2 to ensure that everything is going according to plans. I want to ensure the public that Cunningham Heights is moving along with the project. During the next week I am confident that Sandy Point and other areas will commence and within a short time we will have over 100 such projects on stream.”

Staff of the Week: Gary Matthew