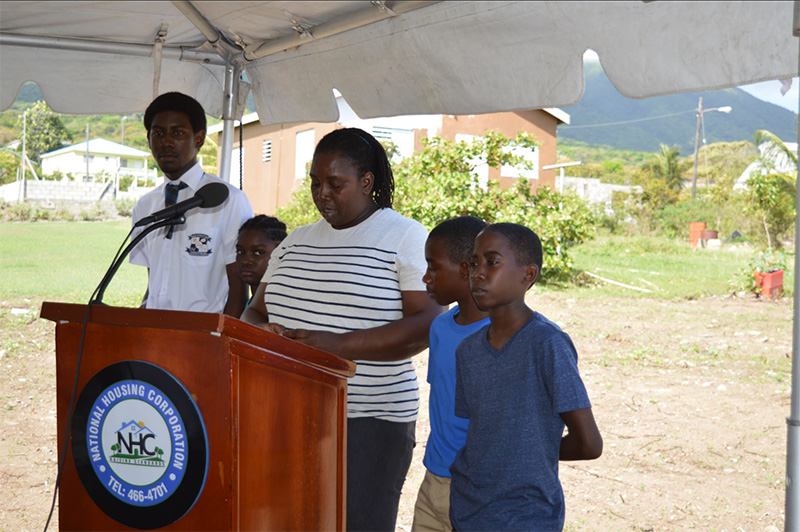 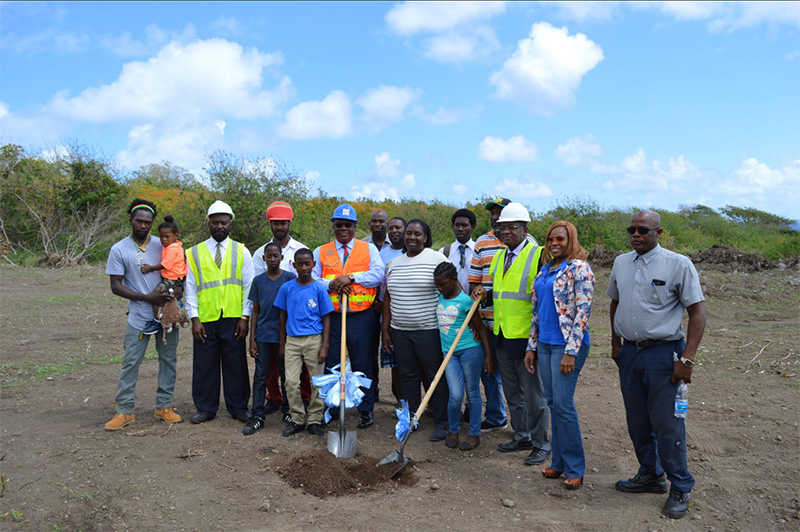 BASSETERRE, ST. KITTS, May 5th, 2017—Following a cry for help in a recently held Town Hall Meeting at the Saddlers Primary School, The Hon. Eugene Hamilton, Minister of Agriculture, Human Settlement, Et al and the Prime Minister of the Federation and Constituency Representative for number 7, The Hon. Dr. Timothy Harris, delivered on their promise that was made to Ms. Tara James of Saddlers.

Tara James, a mother of five (5) felt relieved today being a part of the Ground Breaking Ceremony held in Tabernacle in her honour. Ms. James will be receiving a three (3) bedroom Strawberry home in the aforementioned location to alleviate her current living condition. The cost of the house will be heavily subsidized by the government of St. Kitts and Nevis leaving her with a very small contribution towards her new home.

Chairman of the NHC Board and Master of Ceremony of the proceedings Mr. Valentine Lindsay, expressed great joy knowing that the house will be built for a well-deserving family, especially one that he knows from his teaching career. He also noted that under the Team Unity Government, once a promise is made every effort is put forward to deliver on that promise.
According to Mrs. Simpson-Browne, General Manager of the National Housing Corporation (NHC), NHC continues to demonstrate its mandate, which is to provide housing for the indigent and infirm and that today is a testimony of same. Mrs. Browne also said that construction of the home for Ms. James and her family will begin on Monday 8th May, 2017 and that it signifies ‘another promise made another promise kept’ initiative.

In the message delivered by the Hon. Eugene Hamilton, he is quite pleased with the decision that was taken by the NHC and the Team Unity Government to construct a home for Ms. James and her family. “This is a simple ceremony today but it is of profound significance and profound positive impact on the life of a young woman and her family who need the support of the Government and the people of St. Kitts and Nevis. It is also a profound positive impact on this community in Tabernacle and indeed the entire country. I am particularly pleased that we are doing this today to live what we have indicated to the country in our campaign; of doing the greatest good for the greatest number of people and for the lifting up and the raising up of the poor and indigent among us,” said Mr. Hamilton, in his remarks.

The Hon. Eugene Hamilton also stated that there are persons in St. Kitts that really need the help of the Government, and that NHC will bring that comfort to them by raising their standard of living. NHC has started on this quest by assisting some less unfortunate persons around the island.

The Hon. Dr. Timothy Harris, as the Constituency Representative for the area, felt proud that he delivered on his promise to this family, especially knowing that the children can now have a home to call their own. “I say thanks to Tara and her family for coming out, not only because today is her day; a wonderful day for her and her children but because in some ways, today is about ordinary people of St. Kitts and Nevis. Today is about the fact that in St. Kitts and Nevis, at this time, we are privileged to have a compassionate Government. It is because we are a compassionate Government why we are here,” he echoed.

Dr. Timothy Harris stated that the cries of the people will not go unheard. He thanked and commended Minister Hamilton for his immediate response to Ms. James’ public cry. Dr. Harris also thanked Ms. James for her courage in being vocal about her condition. “I thank Tara for her courage to speak up in defense of herself. The Government recognizes that there are many Tara’s elsewhere in St. Kitts and Nevis going by other names. In the same way we responded to the Cornelius’ family in Central Basseterre is the same way Eugene Hamilton and I, and the Cabinet by extension, we recognize that we have to respond to even more persons throughout the length and breadth of the country and we are committed to that,” said Dr. Harris, in his message.

The Hon. Dr. Timothy Harris encouraged the public to be patient and to rejoice for others’ gains because their turns will come. He also said that a priority of the Government is to make the non-established and the established workers a part of the pensionable payroll because it is about serving people in every capacity so that the people’s conditions can be changed.
Ms. Tara James thanked NHC and the Government for their assistance, as well as, her family and friends for their prayers, and all persons who will play a role in the construction of the house. Ms. James was overwhelmed with joy as her and her family accepted the Government’s invaluable ceremony and kind gesture.

Heartfelt thanks were extended to all speakers, Ms. Natasha Depusior for her beautiful rendition and to Rev. P. Allister Rawlins – Parish Priest for St. Mary’s, St. John’s and St. Paul’s for the invocation.